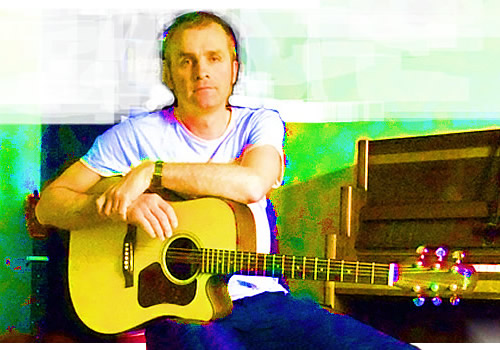 16 and bored with games

Whilst in sixth form, a few of us lads decided that games on a Wednesday afternoon were a little tedious. So, inventive as only teenagers can be, we formed a band. This permitted us to forgo getting muddy by tripping over a ball in a field, and instead 'rehearse' (I use the term loosely) in a derelict school outhouse.

Why am I telling you this? Well, one of these lads was already a bass player, another owned a drum kit, while yet another would look very good as a front man - that left a guitarist's position for the taking.
So, I bought a guitar... and I have never looked back since!

I spent the next ten years of my life touring Europe with a band called "Who's Rachel?"
We wrote original material, played extensively in all manner of venues and generally had a jolly good time.

A small taste of that musical adventure can be heard below:

Track title: "Damp Side (of the sewer)"


I have continued to write, perform, arrange, record, engineer and produce songs, using the guitar and voice as my principle instruments, ever since - that's over 30 years now.
Yet another small taste, this time of my most recent musical development, can be heard below or explored further by clicking here.

After having children and discovering the unparalleled delights of imparting knowledge, in 2005 I began to teach my daughter, and two of her friends, to play the guitar.
Since then, I have continued to teach music, both privately and at Derwen College, a specialist college for young adults with LDD. I have also had considerable teaching experience in Chester Primary schools and other local places of learning.

I have qualifications - to degree level; BA (Hons) - in teaching, music and audio engineering. I am also a member of the Registry of Guitar Tutors and constantly strive to increase my personal, professional development.